Cycle lane dividers are traffic management devices that make boundaries between different traffic lanes and contribute to traffic control. These lane segregations give bicyclists, motorists, cars, and other vehicular traffic the right of way by dividing pathways in travel lanes.

As a result of bicycle traffic lanes, the incidence of fatalities decreases to a greater extent. Thus, you should deeply understand the role of lane dividers, so every road user is safe in your zone. 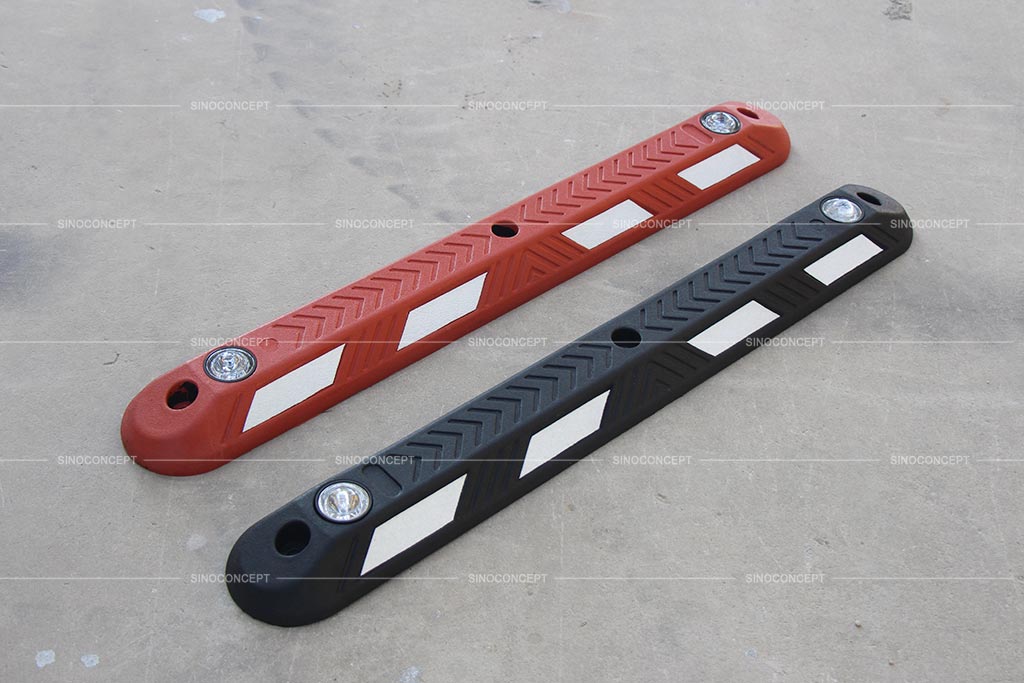 Shared pathways are never safe for bicyclists as overspeeding cars, motorists, and other vehicular traffic has plenty of speed, and they can collide with slow-moving vehicles. Similarly, every vehicle has its particular mile per hour speed and driving on the same road can also disturb traffic flow. In such a hazardous situation, using cycle lane dividers on roads is of the best ways to make protected bike lanes and bicycle routes.

When separate lanes are made, bicyclists and other vehicular traffic move in that lane. As a result of these segregated lanes, drivers can take their allowed speed and reach their destination quickly. Similarly, lane dividers greatly impact decreasing road accidents and fatality rates. Many supportive studies are showing that protected lanes have contributed to reducing the death rate and at the same time help to control traffic.

As you know, markings are also used on roads to mark divisions, and they are good up to some extent. On the other hand, physical lane separation is far more effective to give traffic a steady flow. Many drivers, especially youngsters, don’t follow traffic rules despite all efforts.

They easily violate those painted markings and drive rashly. Their overspeeding is not only dangerous for them but can also put other’s life at risk. Pedestrians and bicyclists are most vulnerable to such vehicles among all road users. So, when lane segregation are used to make boundary or lanes for different vehicle clearly, they travel in their lanes and do not collide with bicyclists and pedestrians. 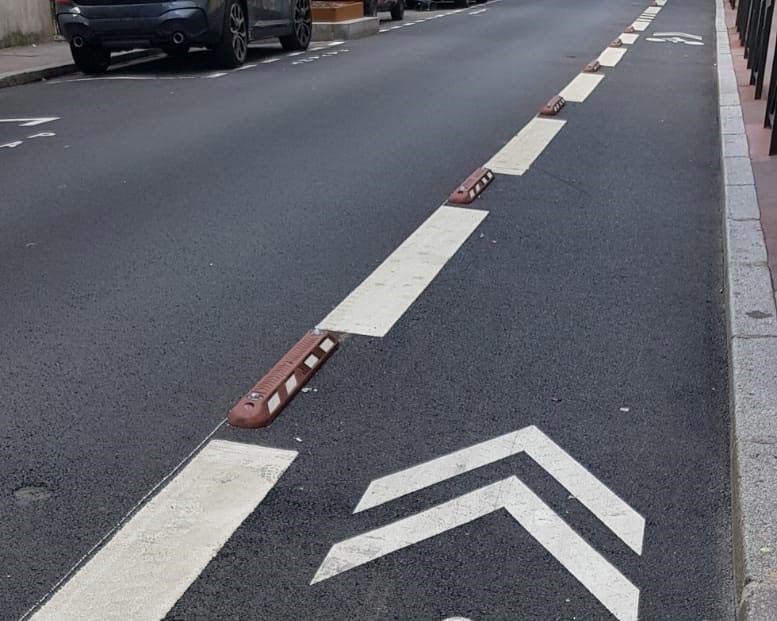 How do you select the best cycle lane separators?

There are different types of cycle lane dividers. Some variations are based on material, while others have a unique design. Similarly, other factors like safety, durability, installation cost and accessories also count for selecting the best lane separators. As these road traffic safety devices are installed after complete procedure and approval from the city council, transportation department, and federal highway administration, you should select the most durable lane separators.

So, these qualities can help to choose the best cycle lane separators:

What is the role of visibility in lane dividers?

All traffic calming equipment must have high visibility. As lane separators are not vertical structures that people can guess their presence. These are flat on the ground and have a certain height to show the mark on the roads. Therefore, it is crucial to use visible cycle lane dividers so they are detectable.

If you install undetectable lane separators on roadways, driveways, highways, complete streets, and other sites, vehicles travel in speed and, as a result, trip over them. The same will happen to the pedestrians.

Thus, you should use bright and clearly visible lane segregation. Colours have the main role to make lane dividers visible. Typically, yellow, red and black are considered bright colours, and reflective strips are visible. Some lane dividers have white reflective films, while others are completely coloured. Thus, it depends on your selected lane separators. These reflective lane dividers are visible day or night to give maximum safety.

When you consider colours as the main factor for visibility, you must not forget their material as they also impact the colours of the lane segregation. Some materials like plastic or concrete give a bright appearance, but they fade with time. On the contrary, rubber is not painted from the surface, and its visibility remains intact. So, it is vital to keep all aspects of visibility in your mind. 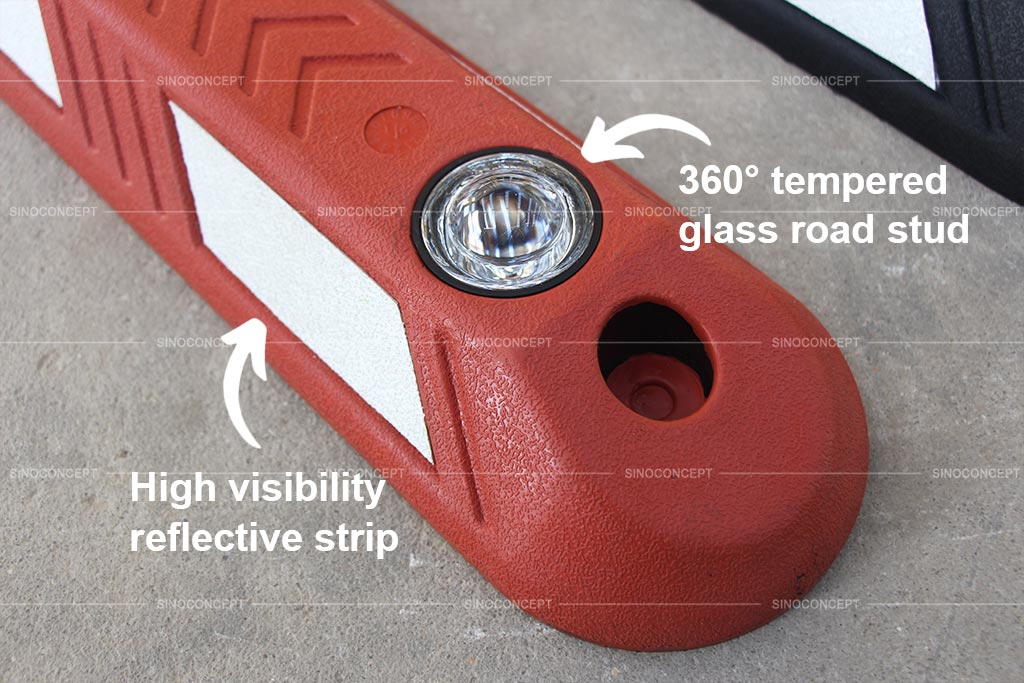 How to use cycle lane dividers to make lanes?

It is quite easy to use and install lane dividers on roads. You don’t need heavy equipment or a large team to make lanes. But, you may require some helping hand to assist as per the area or length of the road.

So, when you have bought lane dividers, check their accessories, fittings, and other materials needed in their placement. If there are any instructions with the package, read them before going to the installation site.

When everything is done, mark the lane on the road or your desired location, maintain spacing between them and fix with bolts on the road.

Mostly, their placement or removal is effortless, so it depends on whether you want to use it permanently or temporarily. Using lane separators for cyclists also develops better cycling infrastructure and make the routes bicycle friendly.

Is it necessary to install lane separators on a flat surface?

You can only use lane separators on irregular surfaces when they are flexible. They easily adapt and follow the shape of the road without showing that it is not a straight road.

On the other hand, some manufacturers use stiff or breakable materials. You may successfully install such lane dividers, but there is every chance that they are damaged due to passing vehicles.

So be careful and use only durable, sturdy and weather resistant lane separators that perfectly fit your space.

Cycle lane segregation is a great way to reduce road congestion as they divide vehicular traffic into different lanes. These lane dividers make cycling, biking and walking pathways to ensure riding a bike or bicycle is safe. When physically separated lane markings are visible on roads, drivers are forced to follow traffic rules and drive in their lane.

In addition to the lanes, the traffic control department also put effort and maintaining traffic flow. When drivers, riders and bikers drive in their lanes, every vehicle can travel to allowed speed without any blockage.

So, encourage riding a bicycle with road safety devices as it also invites recreational bicyclists and as result, private motor vehicles are reduced. This will also help inactive bicycle transportation.