Everything you need to know about speed bumps!

Speed bumps, also referred to as sleeping policemen and traffic thresholds, are popular traffic calming measures that many people see around them regularly. They are installed to slow down speeding vehicles and create a secure environment for walkers.

This article has provided a comprehensive guide on what speed bumps are and everything else that you need to know about them. 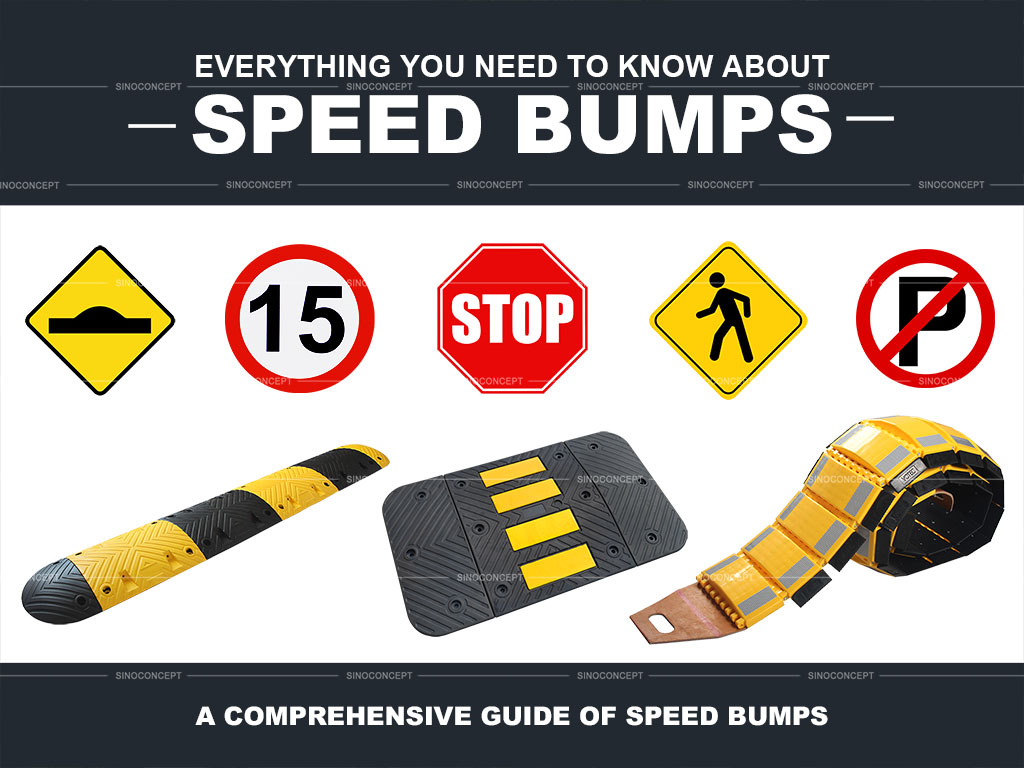 What is a speed bump?

To give a brief answer to the question “what is a speed bump?”: a speed bump is a device having a low raised surface that is installed on pavement or roadway and extends across the travel width. Their height can range from 25mm to 100mm, and they should have a minimum length of 900mm. They come in different sizes. A small space between one of the edges of the closed road and a speed bump is left to help with drainage.

Speed bumps are given several names based on their structure and function. Some of these names include speed breakers, traffic threshold, judder bar, lying-down policeman, and sleeping policeman.

It was reported in 1906 in In the New York Times that a five-inch rise of the crosswalk above the road surface was implemented. Arthur Holly Compton, who is a Nobel prize winner, is known for inventing the basic speed bump design. He called it “traffic control bumps.”

In 1973, the British Transport published a report on the behaviour of different vehicles for different geometries of speed bumps. At that time, the use of a speed hump on a public road was not allowed. People had still installed them on a private road.

Learn more: What is a speed bump?

A speed hump is generally wider in shape compared to a speed bump. It has more width. It is gentle on vehicles and makes them reduce speed around 10 mph to 15 mph.

Speed humps are more commonly used on connector roads and city streets where pedestrians have a close interaction with vehicles. It is usually avoided on arterial roads and routes where emergency vehicles like an ambulance usually pass.

On the other hand, speed bumps are more aggressive city traffic control devices. They make vehicles slow down by forcing them to reduce speed below 10 mph. They are used in pedestrian zones, school zones, and work zones to provide safety to walkers. 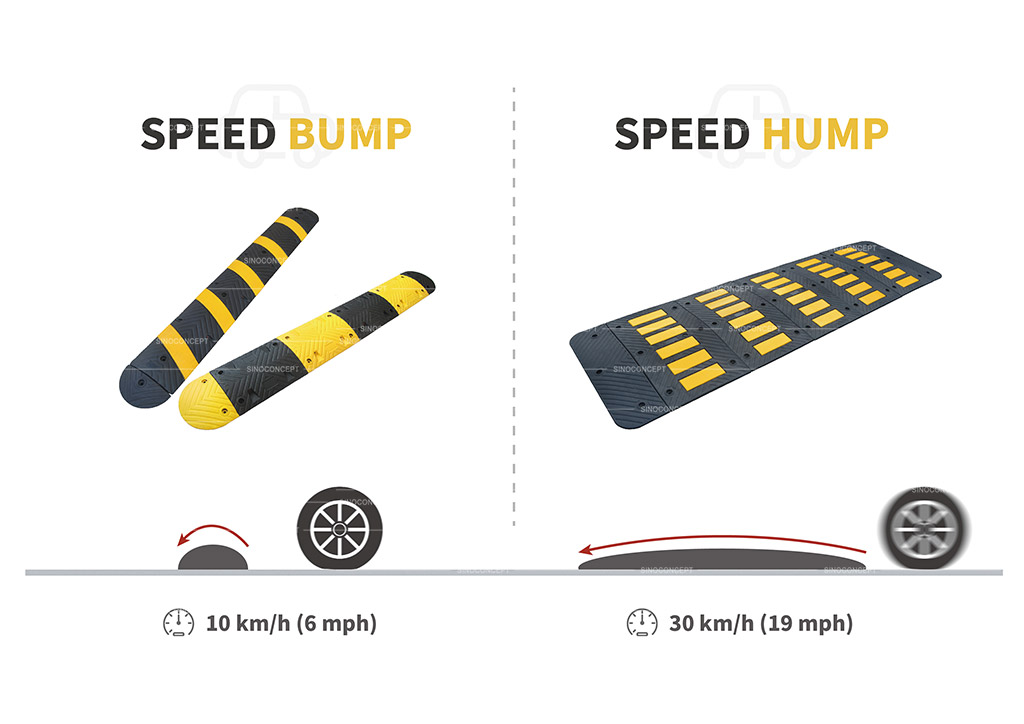 A speed bump is a versatile tool that people use for many purposes.

Role of speed bumps are usually as below:

Pros and cons of speed bumps 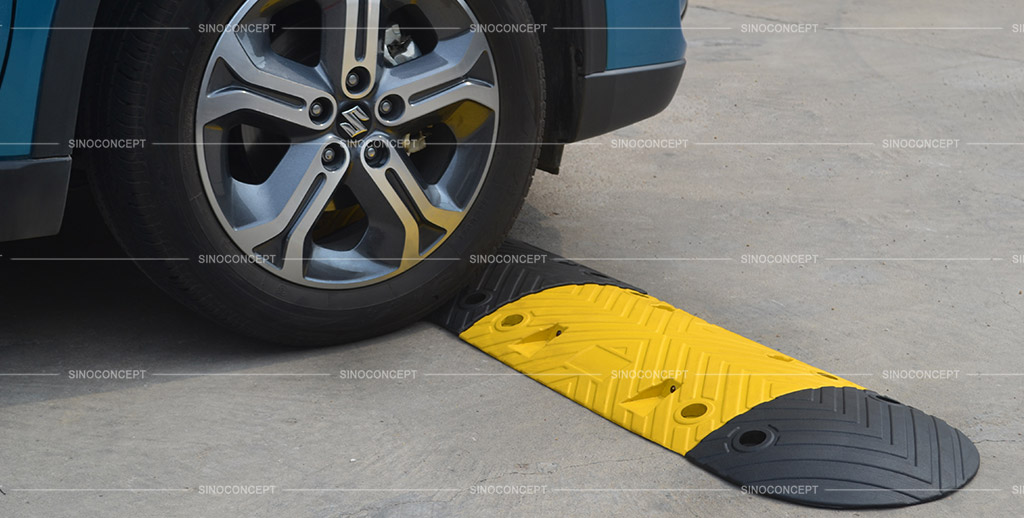 Traffic calming measures are taken to reduce traffic speed and traffic volume in urban or residential areas in order to create a safer environment for people.

The Department for Infrastructure will decide which measures to use in a particular area. They will consult with the department of transportation, the federal highway administration, local municipality, emergency vehicle service providers, and local resident representatives before making any decision.

There are numerous benefits of traffic-management measures. Some of these benefits include:

Traffic data and studies show that traffic calming measures have the potential of reducing accidents by 40%.

Each calming measure is suitable for a particular area or situation. A speed bump on the road is one of the most commonly used measures. Let’s study it a little more to understand its effectiveness and usefulness more. 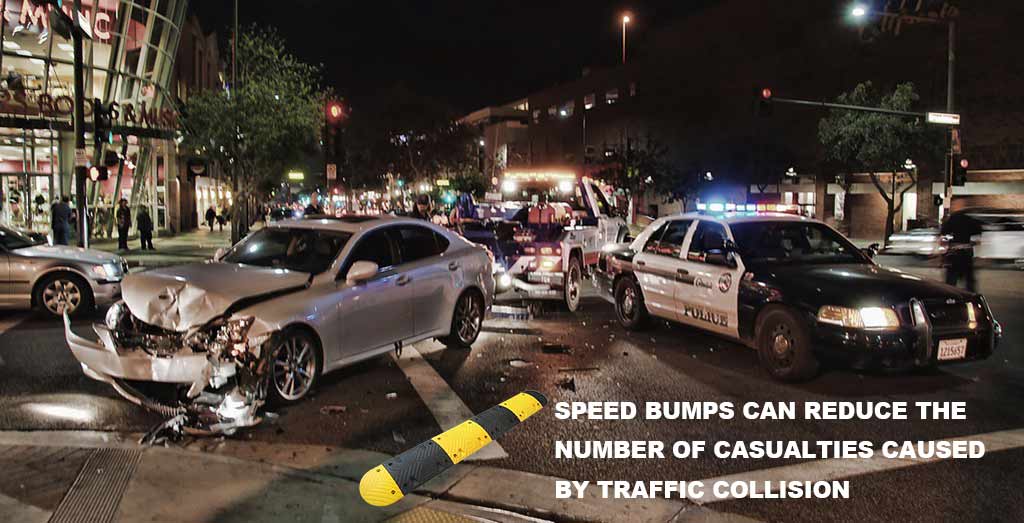 The traffic-control device, speed bump, is categorized into different types based on its construction material, style, colour and location where it is installed. Let’s see the following list of speed bumps.

You need a hammer drill, sledgehammer, steel spikes, and epoxy resins to install speed bumps. Below are the general steps of the speed bump installation process.

You can remove a speed bump by opening bolts using suitable tools. Speed bump installation depends on the construction material, type, and length of a speed bump. Generally, it does not take long and can be done in 30 to 60 minutes.

You can improve the performance of your speed bumps by using accessories such as end caps. An end cap covers the end of a speed bump to make its edges safer for vehicles and avoid speed bump damage.

You can also buy bolt shields to protect bolts inserted in the pavement. It will help you increase the longevity of a parking curb and speed bump. 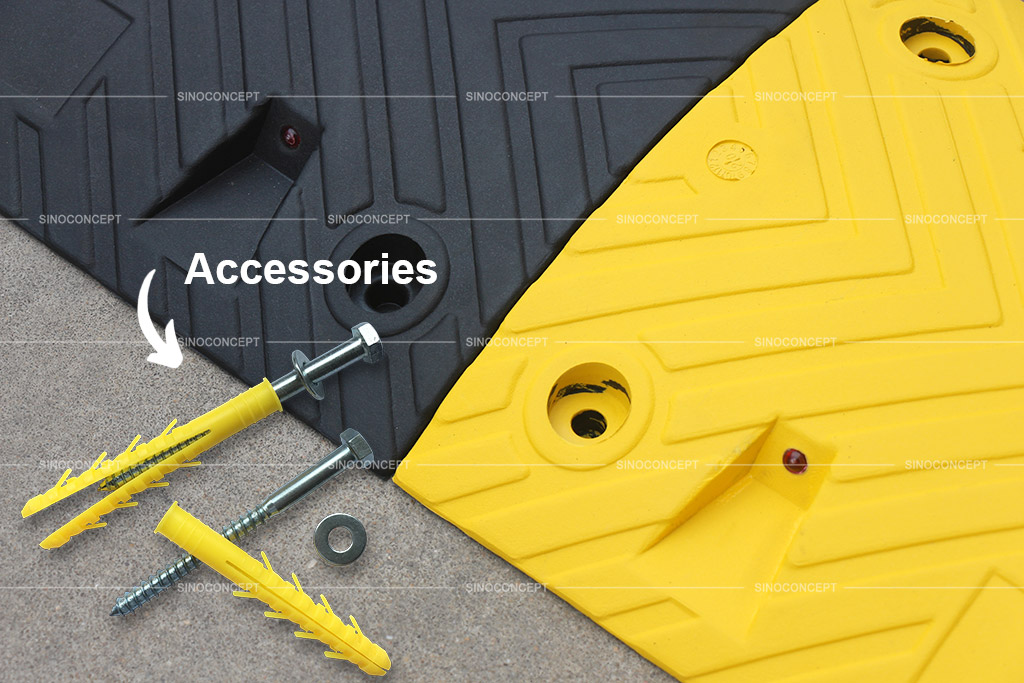 There are specific speed bump standards and regulations issued by the federal highway administration to ensure that road bumps are used the right way in the UK. Regulations regarding installing a speed bump on a private road are different from installing them on a public road.

In general, you should keep the following points in mind while installing a speed bump.

There are several factors that you must consider as a purchasing guide for speed bumps. These factors include:

Below are the famous manufacturers of speed bumps who you should consider for your next purchase.

Get to know about speed bumps in different countries:

A speed bump in the road is installed to control traffic flow and calm traffic to provide pedestrians with safety. It ensures pedestrian as well as vehicular safety. However, it may increase traffic noise and damage vehicles.

Speed bumps are divided into different categories based on where they are installed and what their material, style and colour are. When buying a speed bump, you should consider the colour, design, material, cost, manufacturer, and durability of the product.

Different countries have different standards and regulations regarding the use and installation of speed bumps. In the UK, the height of a speed bump should range from 25mm to 100mm. Learn speed bump regulations of your country or area before installing them in your neighbourhood.