Speed table vs speed hump: Which one is the best?

Out of the many traffic calming measures, the vertical deflection ones are some of the most commonly used for speed control. These include speed humps and speed tables. We know speed humps effectiveness. These are commonly found on roadways to calm traffic, and are often compared. Many have the misconception that they’re the same whereas there are several differences between them.

Both are calming techniques that give a jolt to the oncoming traffic. However, these undulations are different when one looks at their features such as their top surfaces, lengths and widths. While both of them can bring a low traffic speed, the rate of speed reduction differs.

Overall, every department of transportation has to consider which one is the best for the roadway in question. 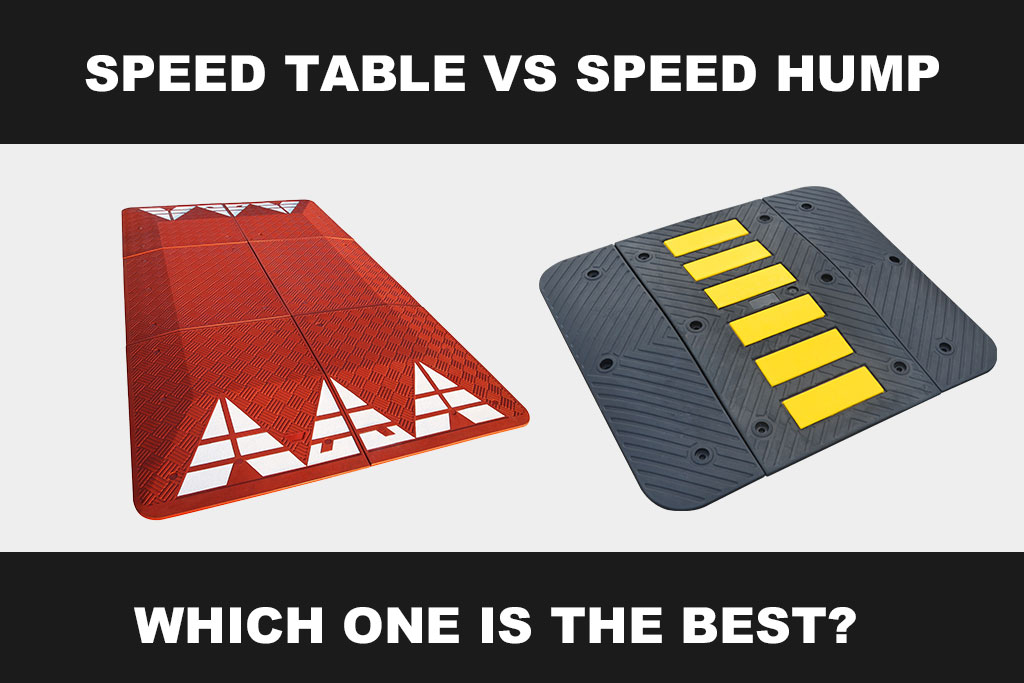 What is the difference between a speed table and a speed hump?

Speed humps and speed tables are both bumps on the road. They’re used as an alternative for the police enforcement of speed limits. However, because these road bumps achieve different results, a traffic engineer will not use them interchangeably. This is a fact that applies to all types of traffic calming measures. There are other factors involved as well such as the space in question.

The following are the basic details of these speed breakers:

The speed table is a basic solution for achieving a reduction in speed. The speed table is a speed breaker that causes vehicular traffic to slow down. Its job is to warn the motorists who originally intended to speed through traffic. The speed table can be successfully used to discourage speeding as it can cause discomfort to the driver and the motor vehicle owners if they go over too fast.

Speed tables can be found on public roads, especially at pedestrian crossings. They favour emergency vehicles very well as they are easier to go over due to their lower heights. They’re not common on private roads and private property owners don’t use it on their driveway like the speed bump. It can be made from several different materials. The traditional one is the asphalt type, but the most efficient one is the rubber type.

Today, the best-sellers are made from rubber, often recycled. They have more pros such as lowered noise levels and induced wear and tear on vehicles. 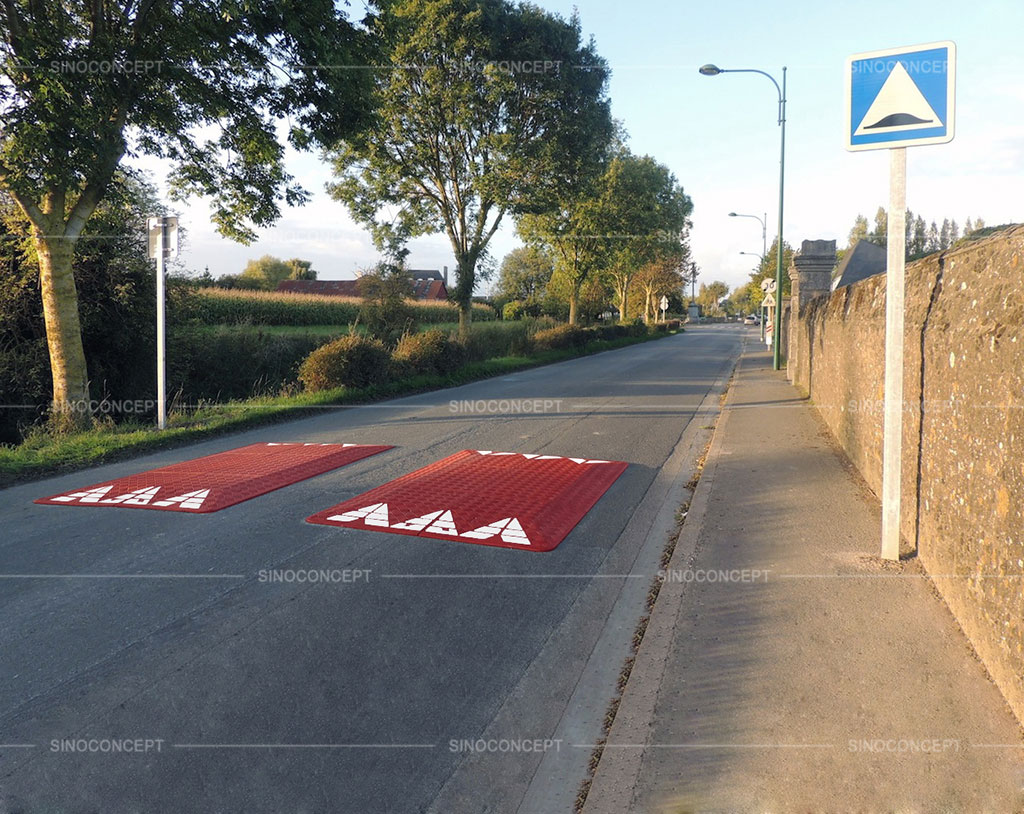 A road hump maintains the flow of slow traffic on city streets and on public roads. It causes more congestion than the speed table, but also lowers the traffic volume. The speed hump is also often used on emergency-response routes, like the speed table. This is because it lets emergency vehicles such as ambulances and fire trucks go over without disturbing their response time too much. But at the same time, it enforces pedestrian safety.

This raised section is often used in series; evenly spaced to create a slow zone such as a work zone, a school zone, or just a pedestrian zone. Overall, it is one of the most effective traffic control devices to prevent crashes or reduce their severity to prevent fatalities. Apart from being friendly to the local ambulance, it is also suitable to serve other heavy traffic such as buses. 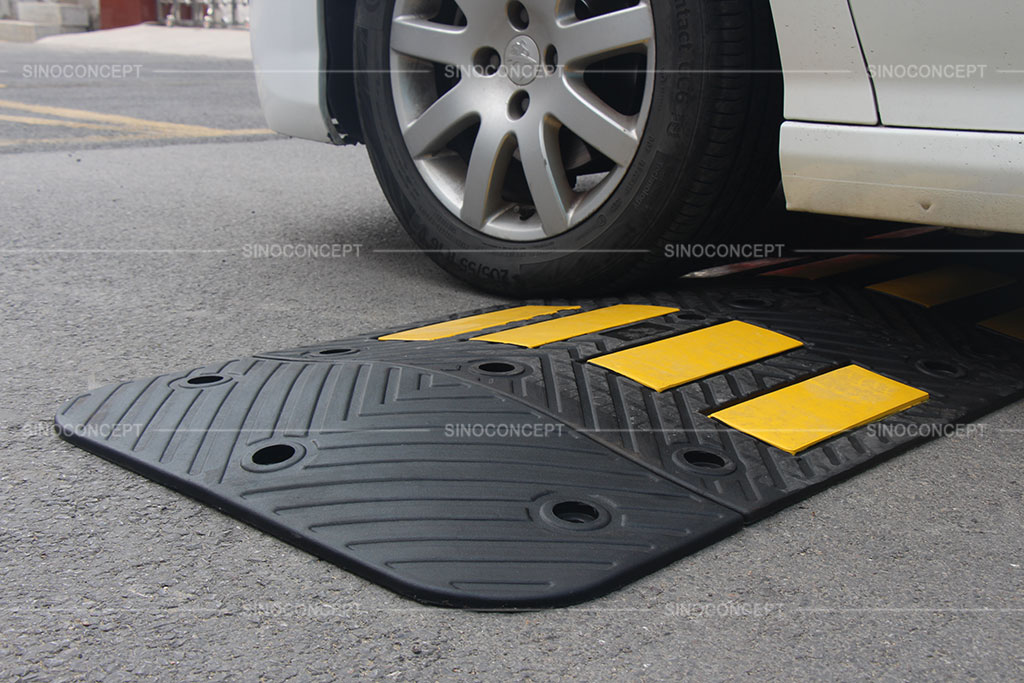 People choose traffic engineering measures to achieve optimal traffic safety. In order to do this effectively, they should know about the facts and the traffic data related to these devices. They both have been able to achieve speed reductions up to 40%. Both the speed breakers are able to achieve significant reductions in the number of collisions and fatalities as well.The following are some important points that one should know in order to make their roads less unsafe:

How fast should one go over them?

Speed breakers are known for achieving a slow traffic speed. Speed tables don’t reduce speed too much as they can allow motorist to go over them even at 45 miles per hour. In comparison, speed humps will allow a motorist to go up to 20 mph, which is the minimal requirement of a speed table. Due to these figures, both can be used for pedestrians at crossings and to control city traffic.

What is the required ground clearance?

Ground clearance is an important factor as having a low car can damage the underside while going over vertical deflections. In the case of these undulations, one should at least have 5 inches (approx. 130mm) of ground clearance. These values differ based on the required heights by country.

Speed humps have been known to cause structural damages to vehicles over the years. They have a greater history of doing this because they’re built on public roads and deal with more traffic than speed bumps. Because of this, speed humps are also known for causing delays in the response time of emergency vehicles.

A speed table also has several disadvantages but they’re in limited proportions due to their smaller heights. They can also damage a car’s underside in the long term. However, they are still preferred by many as they don’t reduce the response time that much.

Noise pollution is a phenomenon often associated with all the speed breakers. The older asphalt and concrete undulations produce more noise on impact which can disturb the neighbourhood. But it is important to know that most of the disadvantages of these raised sections have been eliminated in recent times via their rubber counterparts.

Are speed humps and speed tables bigger than speed bumps?

Yes. The reason that different vertical raised sections give out different results is in due part to their dimensions. While both can be area-wide, the major difference is that most speed humps and speed tables have a flatter top surface. Their width are also bigger as a result compared to a speed bump.

Speed bumps are known to have a greater average height and they also have more rounded tops. They can have a length of to a maximum average of 1,830mm. For speed bumps, which are taller in height, it is recommended to have around 7 inches (approx. 180mm) of clearance.

These dimensional differences are responsible for the respective dynamic speed controls that they’re both able to achieve.

The speed hump and the speed table are two important traffic calming devices that can significantly improve the livability and the road traffic safety of an area. Both of them have similar sets of uses and they are used according to the amount of speed reduction needed. Either way, one can expect to see improvements in the traffic conditions, should one or the other be used properly.

It is hard to say which one is the best between speed hump and speed table. They can perform well in different situations. So choosing the appropriate traffic calming device according to your situation is quite important.