Speed bumps are one of the common traffic calming techniques. We have a dedicated article about everything about speed bumps.

They serve different purposes; however, they are normally used to reduce traffic volume and speed in street parking, school zones, and roads.

Signs and markings are placed around the sites having speed bumps to inform the oncoming traffic of their presence. They calm traffic in slow zone areas which is very effective in reducing the rate of annual fatalities due to road accidents.

Speed bumps are available in the market in many different forms, due to which they can be categorized into many types. Below is the list of the main types of speed bumps.

Types of speed bumps based on their placement location

Speed bumps are the traffic calming devices like a speed hump, speed table, signage, ramps, cushions, pavement markings, and traffic signals that are installed on different locations to control traffic volume and reduce accidents. They are effective traffic calming techniques.

This traffic safety device can be installed in a number of places. Below are types of speed bumps on the basis of locations.

A speed bump installed on main roads for public safety is referred to as a highway speed bump. It is installed to reduce collision risk between vehicles around high traffic areas such as road intersections. Since main road vehicles move at high speed, there must be traffic signs before a speed bump to warn drivers beforehand.

Driveways leading to commercial and public places usually have a high traffic flow. Driveway speed bumps are mainly installed on driveways to slow down traffic to reduce the chances of an accident.

Gravel road bumps are installed to force the high-speed motorist, bicyclists, buses, and cars to reduce their speed below 10 mph. It decreases gravel propel, which is harmful and unpleasant for the pedestrian.

This speed control device is installed on dirt roads by local municipalities to decrease the spread of dirt and the hazard of accidents by implicating speed-limit. The braking distance of a dirt road is also longer, which can risk lives. That’s why installing speed bumps, speed humps, speed signs, and stop signs is highly crucial.

These traffic control devices are used in parking lots, where cars and pedestrians share space closely, to provide pedestrian safety.

Learn more: Types of speed bumps based on their placement location.

Types of speed bumps based on their material

A variety of materials are used to manufacture this traffic-control device for roadways, pedestrian zone, work zone, unmarked crosswalks, pedestrian crossings, school crossings, railroad crossings, and uncontrolled intersections. However, the most common materials used for manufacturing speed bumps include plastic, rubber, asphalt, concrete, and steel. Each of these materials has different durability.

On the basis of manufacturing materials for speed bumps, it are divided into the following types.

Plastic speed bumps are made up of recycled plastic and are usually installed in high traffic areas. They are low-maintenance traffic-management devices as they stay intact for years. They also maintain their colour markings despite exposure to environmental elements.

Rubber speed bumps are manufactured of durable rubber. They are easy to install and remove. After installing rubber speed bumps on a roadway, you can easily detach them to move to another place. They are more suitable for low traffic areas. They usually have a reflective surface which makes them easy to detect.

Asphalt is the most commonly used material for making speed bumps. Asphalt speed bumps are easy to repair, and you can also refresh their black and white or black and yellow markings each year. They also have a water drain in the centre for proper drainage during the rainy season. Since they are permanent fixtures, you cannot move them from one place to the other.

Concrete speed bumps are placed within the pavement or drive lanes. They are long-lasting and can be marked to increase their visibility. 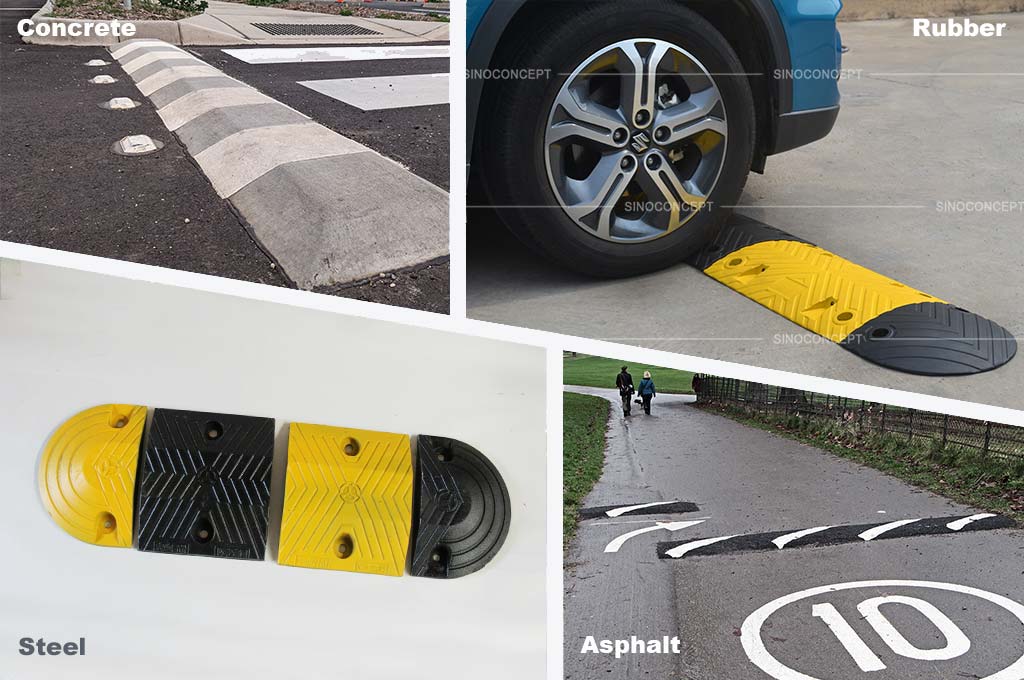 Learn more: Types of speed bumps based on their material.

Types of speed bumps based on their design/style

Speed bumps are manufactured in different styles and designs, which makes them serve many purposes. However, their primary role is to reduce the miles per hour speed of traffic.

On the basis of speed bump styles, they are divided into the following six main types.

They are square, which makes them resemble speed cushions. However, they are not as large as speed cushions. They are usually used in areas where traffic speed is below 50 mph.

Circular speed bumps can be applied at varying degrees of dispersal. You can use them to create one or more than one line to force the vehicles to reduce their speed greatly. They mostly come in white, yellow or black colours, which make them more prominent.

Portable speed bumps can be installed and removed easily. They are usually made up of plastic, rubber, or steel. They are primarily used to temporarily control high traffic flow. You can remove them when the traffic flow reduces and place them on a different site.

Rumble strip is mostly installed on highways to alert sleepy or inattentive drivers of the impending danger. They create a vibration that alerts the driver and makes him realize that he is moving the wrong way. Traffic data shows that they are very effective in reducing highway crashes and saving lives.

Speed bumps with cable channels make a great cable protection solution. They are installed in sites where traffic can damage the laying cable. So, by using these bumps, you can place the cable protectively in the channel.

These speed bumps are designed such that they produce electricity due to the movement of vehicles on streets, roads, and highways. 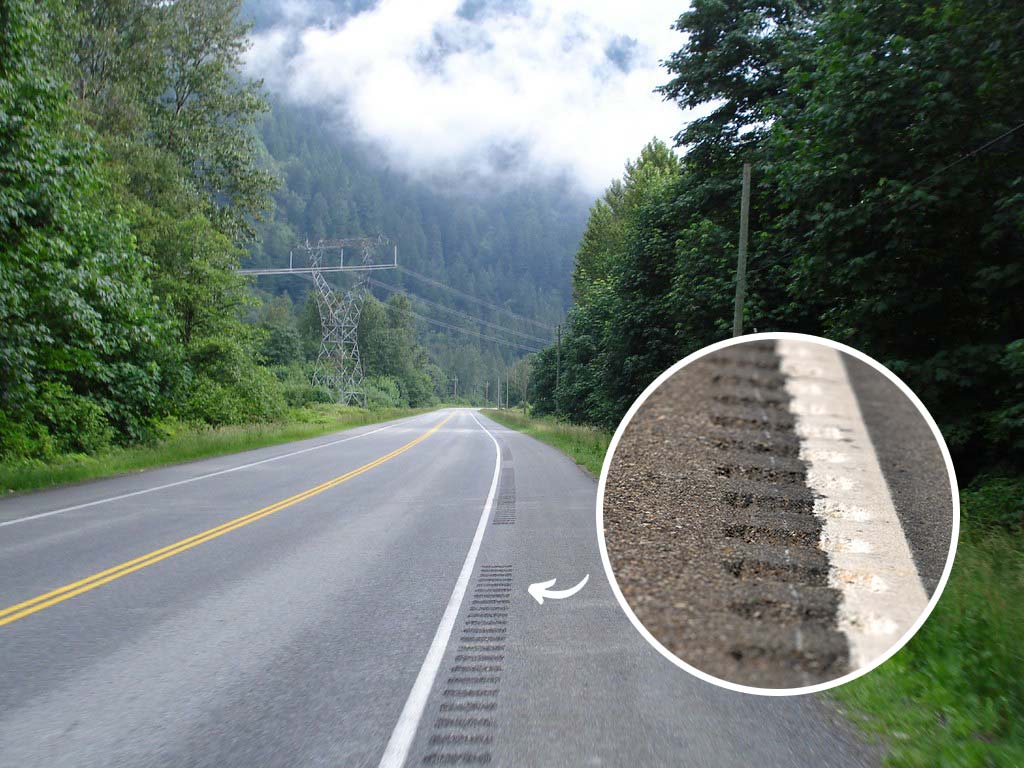 Learn more: Types of speed bumps based on their design/style.

Types of speed bumps based on their colours

Giving speed bumps a colour can make them more visible for the road traffic. These colours make them prominent even in low-light areas or areas that do not have a traffic light at all. Speed bumps are commonly marked with black and white or black and yellow stripes.

On the basis of speed bumps colours, they are divided into the following two types.

These speed bumps have black and yellow markings. They are more common than black and white bumps.

They have black and white stripes that make them prominent in light as well as dark areas. 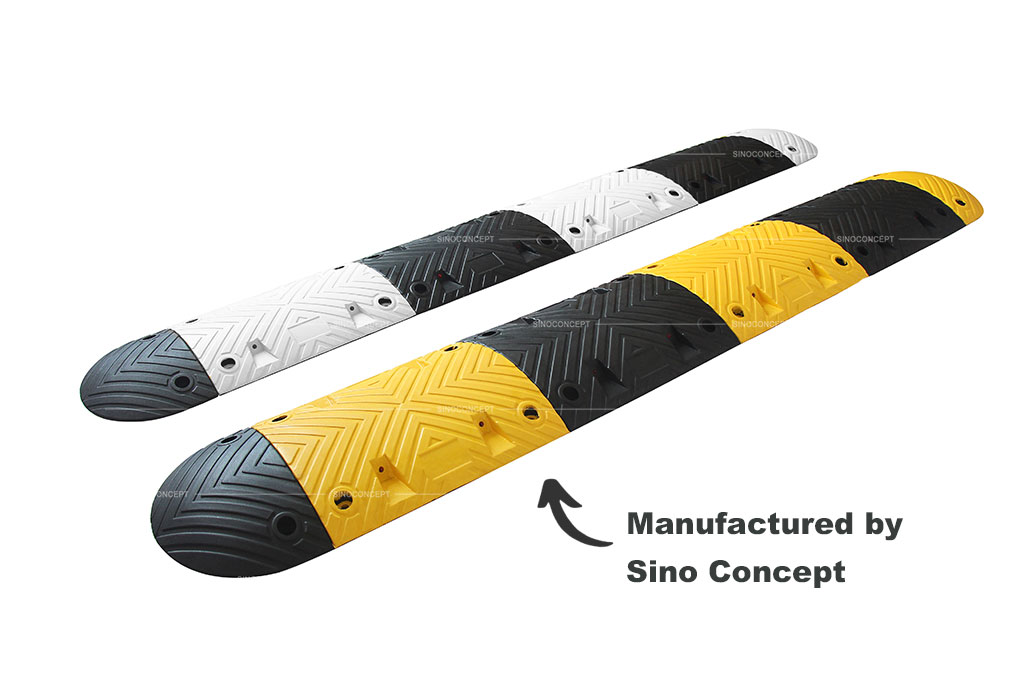 Learn more: Types of speed bumps based on their colours.

They discourage the speed of oncoming traffic in traffic lanes and sites where vehicles have direct interaction with pedestrians like school zone, roundabouts, cut-through roads, city streets, and crosswalks. Road signs must be installed on curbs to inform city traffic of the bump presence.

Bumps in the road come in a variety of types. Each type is suitable for a particular area and function. You should select a type that you believe is more suitable for your neighbourhood or the site where you want to install speed bumps.