As bicyclists are most vulnerable to fatalities in high-traffic areas, the chances of fatalities are greatly reduced when they get secured pathways with no risk of overspeeding vehicles. Therefore, it is in your best interest to know what is a lane separator, get their roles to get maximum benefits.

Above all, given alternatives of lane separators ensure safe lanes in every situation. 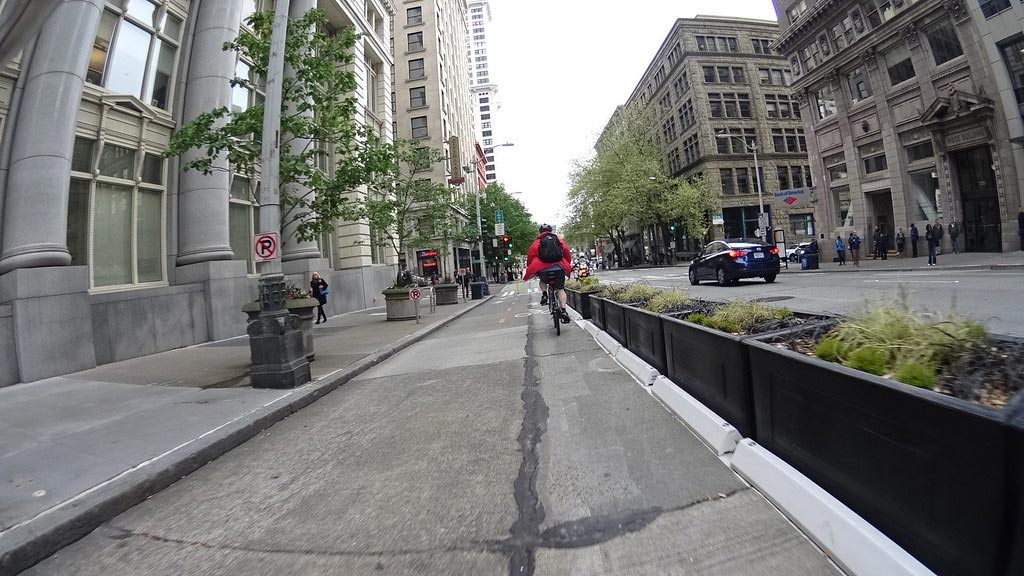 What are the other alternatives for cycle lane separators?

Cycle lane dividers are physical separators to divide lanes and give a smooth route to cars, bicyclists, motorists, buses, ambulances, or other vehicles.

But in some situations, these cycle lane separators are unavailable or less than required. So, you must know their alternatives to use in need.

Remember, all of these choices are valuable and prevent hazards and control traffic by keeping them in separate lanes. All you need is to use it the right way without confusing pedestrians, drivers, and riders, and you will be successful in making a safe zone.

As we know, road marking is a line or pattern drawn on the roadway or highway for controlling traffic. These lines do not have physical limitations but are psychological barriers. Sometimes you see some guidelines mentioned on roads as signs to aware drivers; these are also road markings drawn in different patterns or colours so users can get their meaning.

These road line markings are often found near curbs, road intersections, roundabouts, driveways, parking lots, public zones, school zones, or many other places to give a clear idea of traffic rules. In fact, you can also mention the allowed speed limit in a particular lane.

Posts are vertical delineators that mark firm boundaries between different lanes or paths.

Depending on your requirements, you can use short or long posts, and they are available in different designs. For instance, if you want to use these lane separators on the driveway and don’t want to compromise on the property’s aesthetic value, you can use decorative posts that block the intrusion of heavy traffic and, at the same time, make lanes for different vehicles.

Otherwise, plastic or stainless steel pots are highly portable and can be used on roads or highways. So, you can use posts for road safety in many different ways.

Traffic cones are a great way to make cycling infrastructure safe and make a secured cycleway. Traffic cones have exceptional visibility and can be recognized from long distances as these are bright coloured vertical structures.

Thus, you make a bicycle-friendly way and promote bicycle culture using traffic cones on roads, streets, parking lots, or crossings. Above all, city streets are often crowded with bikes and other motor vehicles. Using traffic cones, you can make one-way or two-way lanes and make cycling routes.

Chain barriers are more like posts, but they give more blockages to speeding vehicles for crossing bicycle lanes. You can use these chain barriers to make protected bike lanes and make a physically separated space for pedestrians and cycles.

Similarly, you can move these barriers from one place to another. They help calm traffic when federal highway administration makes transportation plans for temporary purposes and divides traffic volumes into different routes. When active transportation allows car traffic, vehicular traffic, and bicycle traffic in different lanes, the cycling facilities are increased with low chances of collisions.

Concrete planters are one of the cheapest and easiest ways of dividing cycle tracks to encourage cycling. Planters are also used on street level, and you need to place planters in the middle of the street to show lanes. As concrete is also quite heavy and no one can drag from their site, they give a permanent cycle lane separation solution. People on bikes, cars, emergency vehicles take one route while pedestrians or cyclists follow another lane. Thus, everyone remains safe.

When you know cycling, walking, and biking on the same road can be hazardous, use rubber curbs as they substitute for cycle lane separators. These are long structures installed on roads as lane markings, so the shared space is safe for every user. Traffic lanes made with rubber curbs allow right turn and left turn to traffic and not obstruct their vehicles.

Despite countless uses of rubber curbs in bicycle master plans, you cannot use them anywhere on the road and require approval from transportation departments or the city council to avoid any accident. 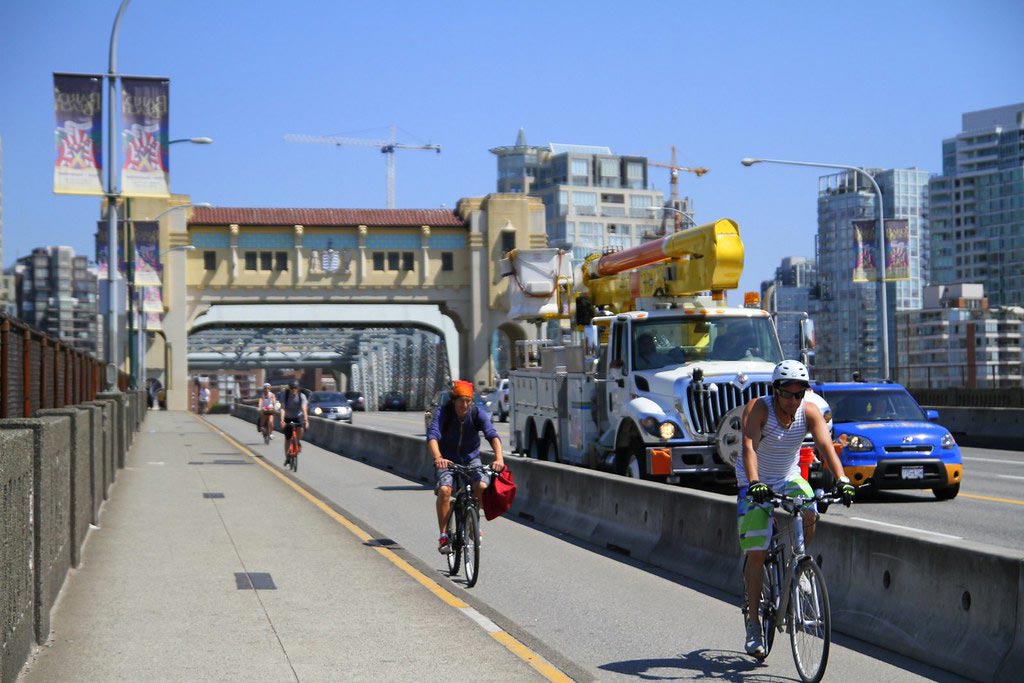 What are the best places to use these cycle lane separators?

Cycle lane separators can be used to make protected bicycle lanes anywhere on roads where the chances of crashes are more.

The most crucial areas are junctions where two roads meet, parking spaces, roadways, streets, or other places where segregated lanes are required for people’s safety.

Similarly, if you think a road has excessive traffic flow and it is difficult for pedestrians to cross, you can also give them a pathway by using these traffic controlling and lane segregating devices.

It is best to use a cycle lane divider where recreational cyclists use bicycles and have fun. This is also very important to develop the interest of people in cycling.

Do alternatives of cycle lane dividers give permanent separation?

Alternatives of cycle lane separators can give temporary or permanent separation depending on the equipment you have chosen.

For instance, road markings are permanently made on the roads that work for long. Similarly, you can install posts permanently as they come in different designs and installation options, so it entirely depends on your requirements.

Rubber curbs can also be used for permanent lane segregation. At the same time, traffic cones and chain barriers are placed on the roads for temporary lane division.

Planters are also heavy and are not removed occasionally so you can use concrete planters for long or short-term separation.

Is it safe to use substitutes for cycle lane separators?

All alternatives of cycle lane separators are completely safe and do give harm in any sense. These traffic control devices help regulate traffic volume by dividing it into lanes, so every vehicle drives in particular lanes.

As in some areas, cycling tracks are specified for bicyclists that need to be marked for visual division.

But in others, there is no separation of lanes on roads, so these lane separators or their alternatives help achieve steady and safe traffic.

There is no risk to bikes, bicycles, cars, and emergency vehicles. Instead, they drive in a safe and risk-free zone. 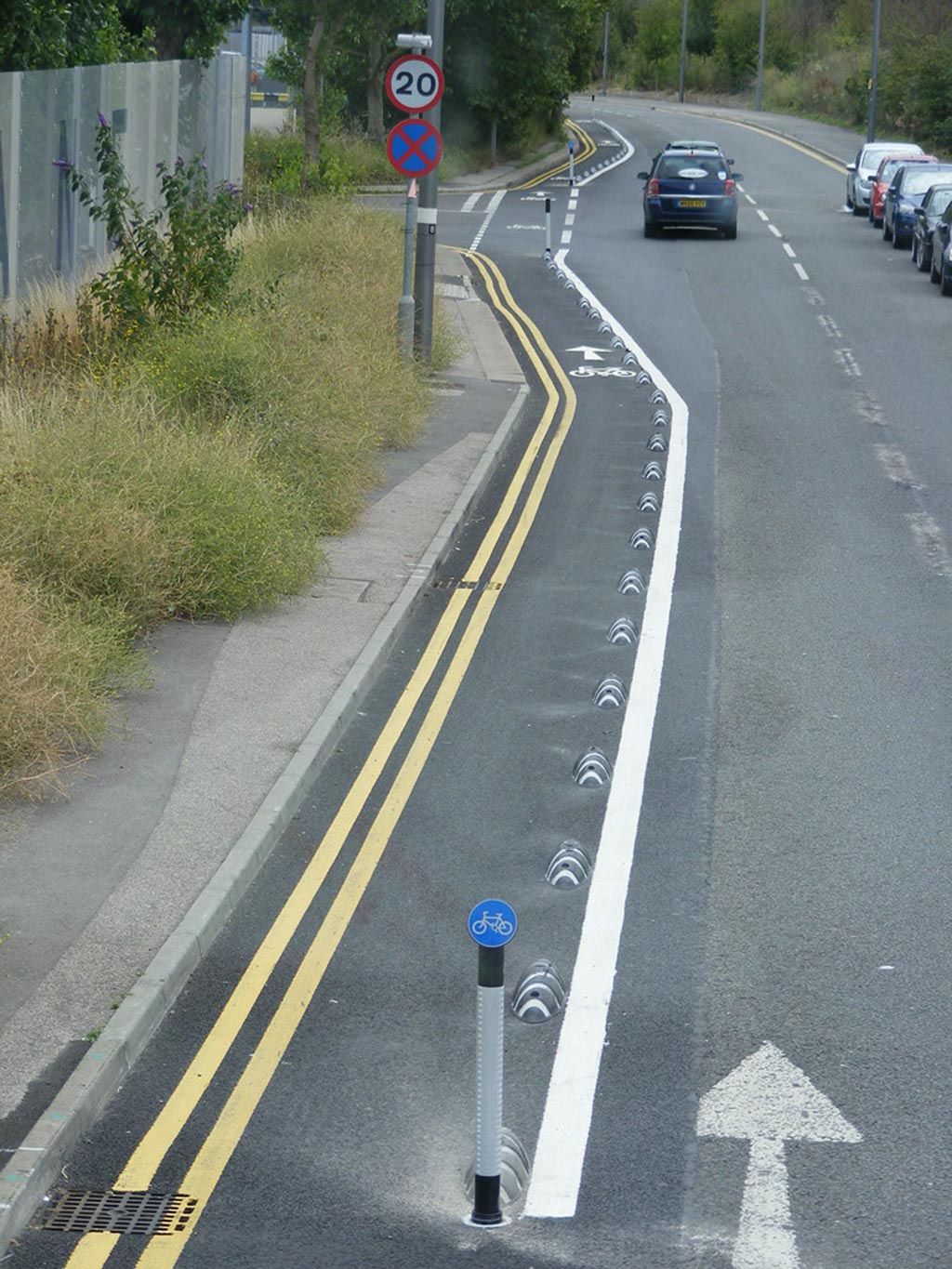 Cycle lane dividers are traffic calming measures used on roads for making cycle paths and give a side path for cyclists. Only bicycles are allowed in these travel lanes, and no other vehicle can drive in this zone for safety reasons.

Bicycle transportation is one of the cheapest and calming ways of travelling. Still, the roads are not secure due to accidents and overspeeding vehicles. As a result, cycling culture is diminishing. But if you want to revive and give bicyclists a cycling area, you should use cycle lane dividers.

You can also use other alternatives following traffic rules and after approval from the transportation department.