As the world is progressing, the traffic system worldwide is getting complex and difficult to curb because of a massive surge in motor vehicles, bicycles, and buses. Still, traffic-engineering departments are doing a great job to produce traffic control devices that reduce the congestion on the roads and increase pedestrian safety.

One such traffic control device for bicyclists is a rubber lane divider. Lane dividers are an amazing traffic solution that creates delineation and separate bikeways for cyclists. However, they can be made from different materials.

Rubber is a popular lane separator material, and it has several advantages, which makes it a suitable manufacturing raw material. Without any further ado, let’s discover the specifications that make rubber lane dividers a perfect delineation tool. 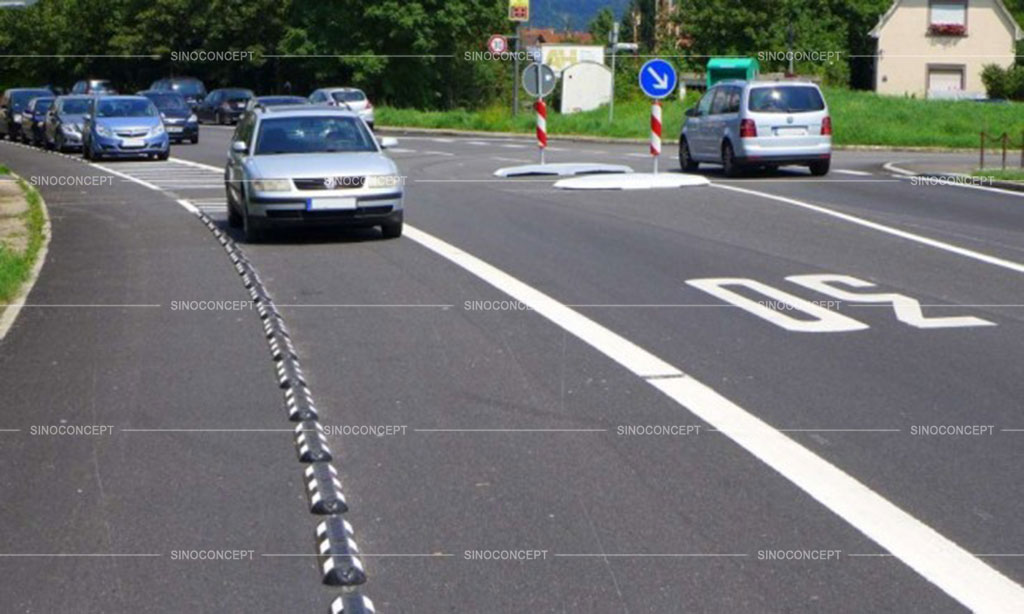 Rubber lane dividers can be useful in parking lots, cycle lanes, cycle tracks, railroad crossing, and exit ramps. They have quite a lot of applications, but their main use lies in protecting cyclists. Some of the useful pros that make them a special kind are as follows:

The two cons mentioned above are not quite significant, and the second one would only occur if someone tried to burn it. However, that’s very unlikely, and the toxic fumes also don’t have a lot of concentration that can harm a person. 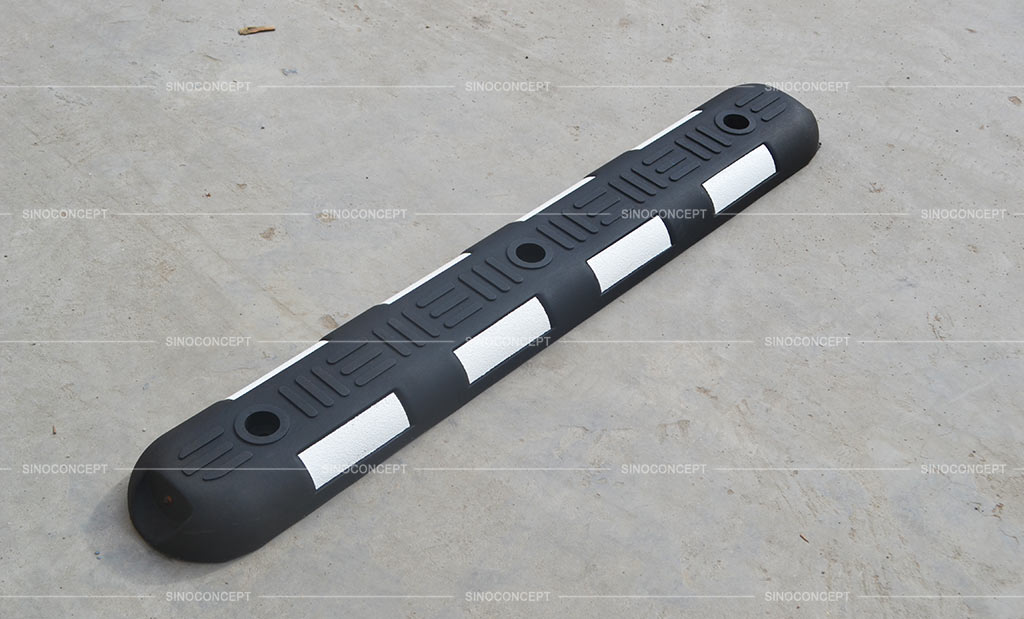 Rubber is one material that can make lane dividers. However, there are more manufacturing raw materials that can create them. Some of them include:

Concrete lane dividers are one of the most stable and durable types. They will pin at a single place and can withstand repetitive collision impact from other motor vehicles. However, their installation is not easy as excavation is needed, which can cause pollution.

Plastic is another popular way to create lane dividers. Thermoplastics are soft and recyclable, which won’t destroy a vehicle’s tires. Plus, they don’t have sharp edges and are great at shock absorption. However, their colour can fade over time, making them less visible.

Steel lane dividers are the most uncommon types. Mostly, bollards or steel railings can be considered as steel lane dividers because they aren’t available much. On highways or a freeway, you can find steel separators in between the roads, which creates a two-way lane for vehicles. Other than that, they are not usually seen in commercial and residential areas. 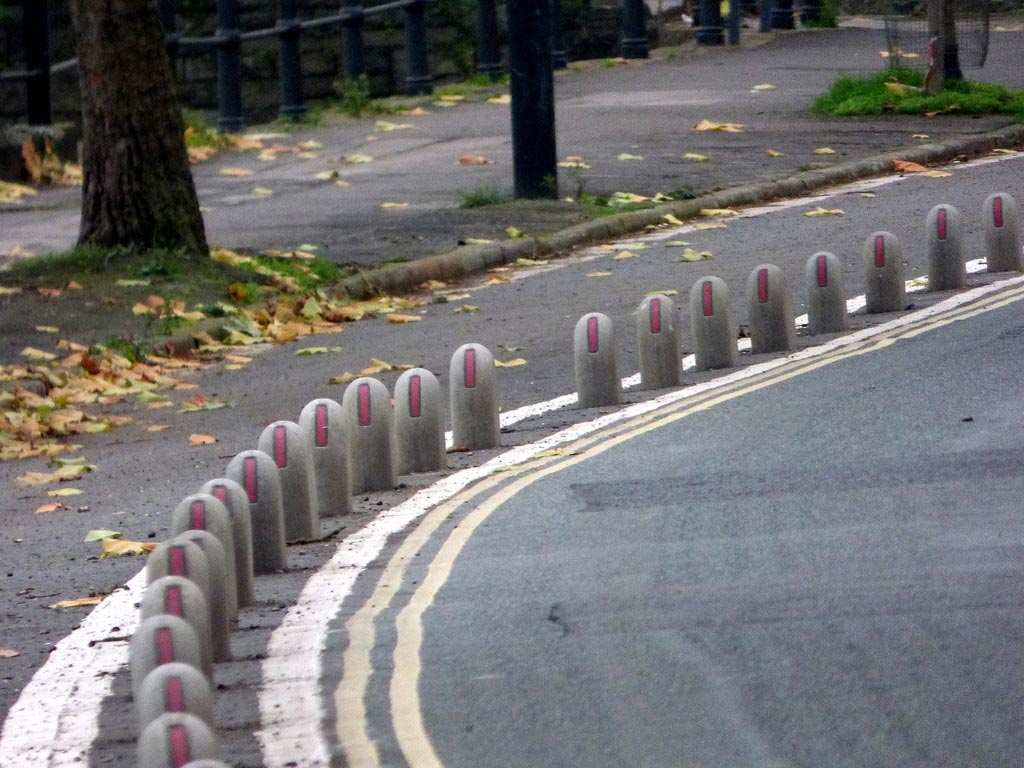 You must have seen speed ramps and bumps that are used to slow down car speed. Similarly, there are rubber lane dividers with a raised ramp shape that can create separate bicycle lanes. They are small and have a length of around 600 mm. Therefore, they don’t take a lot of places.

Straight shape with a guidepost

The most common shape of rubber lane dividers is rectangular which is around 1,000 mm in length and 40 mm in height. Some companies might offer short versions which are 700 mm in length. You can even insert a guidepost in these separators, which are around 700 mm high and can warn motorists.

Some lane dividers have a top flap of flexible rubber, and the base is made of hard rubber. It has a lamp attached in the middle which can increase visibility during the night and make spotting these lane separators easy. They have a box type-shape with a lamp attached in front, which makes spotting them easier.

There are also some conventional tools for creating separate bike lanes. Traditionally, lane markings were used to create bike paths. Lane markings can include pavement markings, buffered lanes, and dashed lines. Buffered lines involves creating a separate space for bicycles with an additional vacuum between cyclists and other vehicles. In contrast, dashed lines simply create separate painted lanes for vehicles. Most of the time, solid white lines are used to create them.

Furthermore, there are other conventional tools to separate lanes for cyclists. Curbs, bollards, and traffic cones are traditional tools that can extend the curbs and create separate places for cyclists to ride their bicycles. They are common in city streets and act as a good way of keeping cyclists safe.

Along with these measures, speed bumps and humps are also profound traffic measures that warn motorists to slow down their vehicles, which can increase traffic safety.

Many organizations like MUTCD, the department of transportation, and the federal highway administration have enacted measures that call out for developing safe safety measures for cyclists across every street, jurisdiction, and municipality.

Bicycling is a great virtue and hobby and providing incentives to people for cycling can reduce possible health complications in a country. If you’re someone who has the authority to control the traffic measures on roads and highways, consider placing rubber lane separators on roads.

These lane separators will be beneficial for pedestrians as well as cyclists. If you’re looking to order high-quality rubber lane dividers, Sino Concept is your place to go. We provide customizable lane separators that will last long. Order yours now by visiting our website